Title: 700 fleeces of wool being used to construct a walkway in Leitrim

The project which will use 700 fleeces in total and is one of the first of its kind in the country.

The project which will use 700 fleeces in total and is one of the first of its kind in the country.

Limestone chippings cover the wool and create a trail that blends in with the natural surroundings. / Leitrim Rural Development

A group of volunteers in Leitrim are reawakening an ancient technique that was first established in the Roman Empire by using sheep’s fleeces to build a pathway across an area of soft peatland.

Bryan Fennell, the rural recreational officer for Leitrim, is leading the project in partnership with Mountain Meitheal North West (MMNW) and Leitrim Development Company, to establish the long-term development of the Leitrim walkway.

The project will use 700 fleeces in total and is one of the first of its kind in the country. Fennell said it will help reduce the damage caused by “trail creep”, where walkers who want to avoid wet spots spread out and unknowingly damage vegetation which is protecting the peatland underneath.

“The current situation with the price of wool in Ireland is essentially a tax on sheep farmers and it’s something they can’t write off against anything else.

“We were very fortunate that we engaged with the farmer who has sheep grazing the land that we are working on and we sourced the fleeces from him.

“The farmer is very proud of the fact that it’s his sheep’s wool that is being used to build these pathways.

“The farmer in this situation is being paid for the fleeces.

“He is also being paid to help us to transport materials and he has been giving us advice.

“It’s a very circular economy as someone pointed out to me recently,” he said.

Fennell is delighted to be able use local resources: “The alternative would have been to use plastic membrane that was probably made in China, and wait months for it to be shipped.”

The project started in July and there are about 20 volunteers attached to the group. Fennell stressed that the volunteers do not use any heavy machinery and everything is done by hand, which is time-consuming and labour-intensive.

“They go out once every two weeks at the weekend, and on an average build day they might get 10m or 11m done with a group of 10 to 15 people working.

The pathway of woollen fleeces is being covered with limestone chippings, which Fennell says will create a natural look for the local landscape.

“The Scots have been doing this for the last 30 years in their development of trails and woodland areas.

“They were just utilising an ancient technique. The Romans were the ones who devised this plan of using sheep’s wool to go across peatland in northern England, Scotland and northern Europe,” he added.

The walkway when complete, will be 125m in length. / Leitrim Rural Development

Fennell was formerly the rural development officer in Co Wicklow and is now the rural recreational officer for Leitrim.

“I’ve been looking for a site to trial this for a number of years, after researching the development of recreational trails all around Ireland,” he said.

“When I moved to Leitrim I realised I had a golden opportunity.

“I found the right landowner who was willing to do this, the right volunteer group and the right financial backing from the department to develop the idea.

“We are trialling this technique to see how well it goes this winter and if it goes well we want to use it in other trail developments in the county,” he added.

“We are trying to establish a methodology to what we are doing, but we are learning as we go along.

“It is well known that this is how people built trails, bridges and railways, but over the last four or five generations as technology has moved on that skill has been lost,” he said. 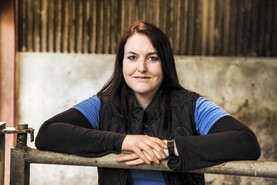 Karen McCabe
Farmer Writes: enough grass with less fertiliser
Exceptional weather has led to a drought for some, but has let farmers in Leitrim cut hay and silage, writes Karen McCabe this week. 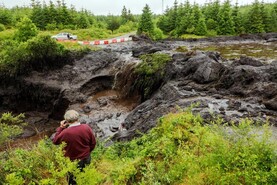 Rachel Donovan
Delay in compensation to landslide affected farmers 'unacceptable' – Harkin
Over 100ac of land was impacted by a landslide which occurred in Leitrim in 2020.