Subscriber only
This content is available to digital subscribers and loyalty code users only. Sign in to your account or subscribe for just €1 to get unlimited access for 30 days.
SIGN IN   SUBSCRIBE FOR €1   USE THE CODE
More > Scotland
27 November 2019
Declan Marren on 27 Nov 2019
Farm Profit Programme: 210kg weaned calf needed to cover variable costs
The focus farms have now completed scanning and it is time to consider what to do with cull cows. Declan Marren writes. 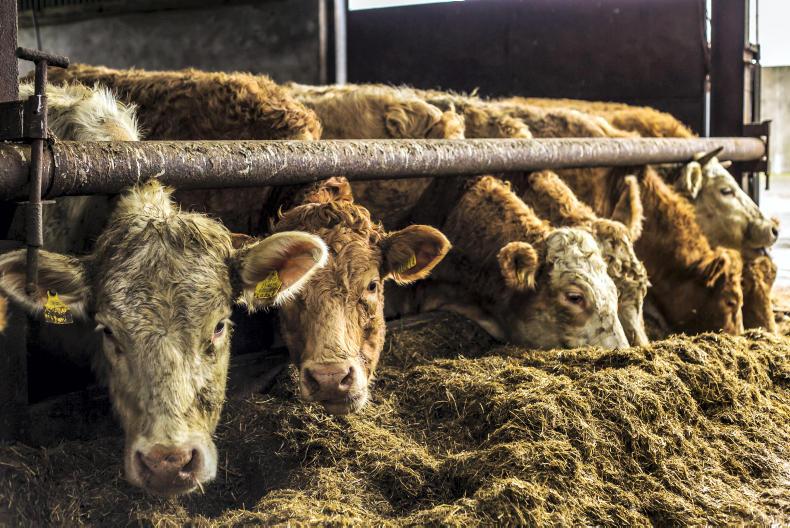 A sizable proportion of the total beef output can be made up of cull cows. \ Philip Doyle

At this stage, all of the focus farms have completed pregnancy scanning for spring-calving herds. As can be seen from Table 1, many of the herds are increasing cow numbers this year as the technical efficiency on the farms increases.

Maiden heifers account for up to 44% of the breeding females in some cases. This figure is even higher for the Websters at Ardhuncart. However, this is a typical number for the farm as they sell heifers with calves at foot each year.

Overall, the breeding season for spring calving 2020 has been successful with an average in-calf rate of 96% across the farms.

The major benefit of this is that in nearly all cases, these results are being achieved in a 12-week breeding period. In a nine-week breeding period, the Duguids at Cranna scanned 33 of 36 heifers in-calf. Of the three empty heifers, one turned out to be a freemartin.

In Caithness, the Mackays at Greenvale managed to get 17 out of 18 heifers in calf in a six-week breeding period.

The thoughts now turn to dealing with cull cows and the best approach to take. To answer this question, it is important to take all costs into consideration.

The cost of keeping a cow

One of the major benefits of the Farm Profit Programme is its ability to put real figures on the costs of keeping a cow. The programme works at a gross margin level as changes in technical efficiencies can be measured from this.

Variable costs account for feed and bedding, veterinary and medicine, fertiliser and other livestock expenses such as tags, sales commission and fallen stock disposal costs. We express these on a per-cow basis.

Taking the average benchmark figure from the six focus farms in the programme over the last three years, the average variable cost comes to £472/cow/year – a lot higher than the £1/cow/day cost often quoted.

If we consider a weaned calf value of £2.25/kg liveweight, this results in a cow needing to wean a 210kg calf to cover variable costs alone. Remember, these are just the variable costs and do not take fixed costs into consideration.

Therefore, farmers simply cannot afford to have these unproductive cows in the system.

One of the dangers with having both a spring- and autumn-calving herd on farm is the temptation of slipping cows from one herd to the other once they are scanned not in-calf.

Granted, this is a better situation than slipping a spring cow around to the next spring calving as you are halving the unproductive time, but it still comes at a cost of nearly £250/cow.

The temptation is to slip a few young cows from one herd to the next to ease cashflow and help maintain cow numbers on the farm. However, in almost all cases, the focus farms have avoided the temptation to do so and made the difficult decision to cull hard.

This did have a knock-on effect on the number of breeding females in the herd in years two and three of the programme.

Interestingly, while cow numbers were reduced on some of the farms, the number of calves weaned was maintained or in some cases increased – even with less cows.

This year’s scan result is the start of these farms reaping the rewards for those difficult decisions in the past. It is now the most fertile and productive cows that have survived – this has the added benefit that retained heifers are now coming from more fertile cows, which has a cumulative effect at herd level.

Options for a poor scanning result

Instead of slipping a cow around to the next breeding season, the focus farms have taken the opinion that the cull value of the cow plus the potential cost of keeping an unproductive cow in the system will more than cover the cost of putting either an in-calf heifer or a bulling heifer in her place for the following year.

This not only reduces the average age of the herd but also allows the potential to improve the genetic make up of the herd.

Cull cows should be divided into three groups:

Sometimes your first loss is your best loss. Cashing these cows in as soon as possible is often the best option.

The cows need to be offered the best silage available on farm – dry cow silage will not be sufficient to fatten these cows quick enough. Alongside this, feed 3kg to 4kg of a barley ration/head/day.

A key aim for the focus farmers is to maximise the output from the farm. As livestock producers, we are only paid for the kilos we sell out the farm gate.

Cull cows are often seen as a byproduct of the main beef enterprise. However, if you consider the fact that on average beef farms will turn over 15% to 20% of their cow herd each year, a sizeable proportion of the total beef output can be made up of cull cows.

Therefore we should always try to maximise the output value of cull cows.