One drop of an MCPA-based spray can pollute waterway for some 30km.

Farmers urged to limit MCPA use

One drop of an MCPA-based spray can pollute waterway for some 30km.

A research plot at the Castederg site saw rush covers reduce by 80% when glyphosate was applied and cutting.

Farmers were strongly encouraged to make more use of glyphosate-based herbicides for controlling rushes at an event in Castlederg on Tuesday.

According to Mark Horton from the Rivers Trust, MCPA levels are “regularly high” in the River Derg and this leads to increased expense at the water treatment facility near Ardstraw.

Farmers were told that one drop of an MCPA-based spray can pollute a 1m wide, 0.3m deep waterway for 30km and it can take up to four weeks for the chemical to break down without treatment.

As an alternative means of controlling rushes, glyphosate-based herbicides, such as Roundup or Gallup, can be applied through a weed wiper. Glyphosate breaks down much quicker than MCPA and weed wipers use less chemical than conventional sprayers.

Terence Henry from CAFRE showed farmers a demonstration plot where rush covers had reduced by around 80% after glyphosate was applied with a weed wiper earlier in the year.

“Don’t think it is just a one-off treatment. You might have to come back again the following year and you need to have a range of other management strategies right to properly control or eradicate rushes,” he said.

These strategies include addressing waterlogged soils by getting adequate field drainage in place and applying lime to acidic soils so that soil pH is at least above 6.

The advice from Henry was to make sure phosphorus and potassium levels are at optimum levels for soil fertility and to avoid poaching or trampling ground with livestock as this can make rush seeds germinate.

Farmers were told that one rush plant can produce 700,000 seeds over its lifetime and the seeds can lay dormant in soils for up to 60 years. It means that the risk of rushes re-establishing in a field remains long after the plant has been eradicated above ground.

CAFRE advice on the most effective method of control is to cut any rushes first and then apply chemical to the re-growth.

“If you use a mulcher instead of a topper, you give grass a better chance of competing with the rushes. Every time you cut a rush, you weaken its rhizome (root system). The plant that grows back will be very green and is more likely to take up the chemical,” Henry said.

It was also made clear at the event that effective rush control is important for environmental management, as well as for agricultural production.

“A very dense infestation of rush is not good for biodiversity. If rushes are dense, you don’t get other plants in the base of the sward and birds like breeding waders do not like heavy covers of rush,” Henry added. 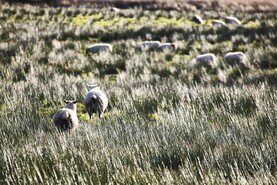 The Dealer
Rushing into the pumpkin game
With a pumpkin patch, there is direct income from the process of harvesting. 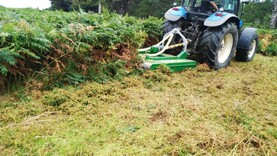 Amy Forde
Widescale production of biochar in Ireland needed - IrBEA
Biochar is a carbon-based product, which is created when rushes, scrub and other material are fed into a machine and converted to an advanced form of charcoal.