Title: Thrive: when margins are tight, drafting must be right

Thrive: when margins are tight, drafting must be right

Of the 140 cattle that were to be finished this year on the Thrive dairy calf-to-beef demonstration farm in Cashel Co Tipperary, 62 still remain on the farm. Ideally, they would have been slaughtered off grass at 19 to 20 months of age and not returned to the shed for further feeding. However, not all animals are suited to this production system.

The breed breakdown of the remaining cattle sees 71% of the heifers and 52% of the steers from late-maturing breeds, Limousin and Belgian Blue.

The reason the farm is trying to operate a 19- to 20-month system is simply down to economics. When we do the figures, it becomes very difficult to return a positive margin from finishing cattle out of the shed.

Table 1 looks at the current cost per kilo of carcase. With silage costing €30/t and the finishing ration costing €247/t, it means it costs €2.26/day to feed the bullocks and €2.02/day to feed the heifers.

This translates to a carcase gain/day of 0.73kg and 0.67kg for steers and heifers, respectively. At a beef price of €3.75/kg, this sees the steers putting on carcase gain of €2.70/day while the heifers are gaining €2.48/day. Therefore, the current performance in the shed is greater than the feed costs by almost €0.50/animal/day.

However, this is simply margin over feed cost. It does not include the cost of delivering that feed to cattle in terms of power and machinery, labour and shed costs.

Also, the current level of performance will not be sustained over a long period of time. Heifers will only perform on a high concentrate diet for 50 to 60 days while bullocks will do so for 70 to 80 days. If the current daily liveweight gains were to reduce in the coming weeks, the economics of the system would become all the more strained.

Unfortunately, for some cattle, a second winter period is unavoidable even with very good growth rates throughout the first and second grazing seasons. On the Thrive demo farm, the cattle need the housing period to achieve a sufficient level of finish. The late-maturing breeds are leaner and slower to lay down a sufficient level of fat.

Sending these animals for slaughter too early is a costly mistake. One Limousin bullock was slaughtered on 11 November and graded a 2= for carcase fat. This meant we lost out on the 20c/kg quality assurance payment (QPS) and lost another 6c/kg on the grid. With a carcase weight of 322kg, this was a price deduction of almost €84.

To put that into context, even if that bullock was gaining no weight, we could have fed him for another month and still have been better off at that stage, had he hit minimum carcase fat specification.

This bullock did not look lean in the yard. In fact, we were more concerned about a Belgian Blue bullock that was also drafted. However, he graded a 2+. Fat score was not an issue for the rest of the steers slaughtered that day either with an average score of 3= being achieved.

Drafting cattle has been quiet for the last two weeks as a lot of the cattle that were close to the point of being slaughtered off grass are now gone. It is hoped to have another significant draft of cattle in the next 10 days.

With beef price currently heading in the right direction in the run up to Christmas, we would be keen to have a good number of cattle away in this timeframe.

Drafting is being done in the race as the animal stands on the weigh scales. However, at this stage, liveweight alone means very little.

It is more about having a sufficient level of finish on the animal. Of course, knowing the liveweight is also important as we can see if animals are performing from one weighing to the next.

As outlined earlier, cattle need to be growing in excess of 1kg/day in order to cover feed costs. Where performance is slowing down and there is a sufficient level of fat on the animal, it is best to draft it for slaughter – even at lighter weights. The average weight of the remaining heifers is 533kg, while the bullocks are averaging 602kg. 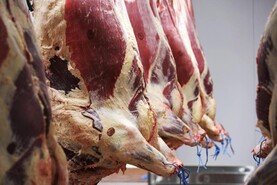 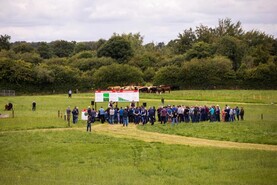 €1,000/ha net margin attainable on drystock farms
Adam Woods takes a look back at some of the main messages from the financial performance of Tullamore Farm at the open day this week. 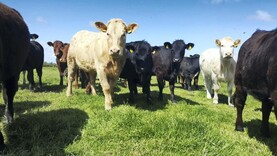