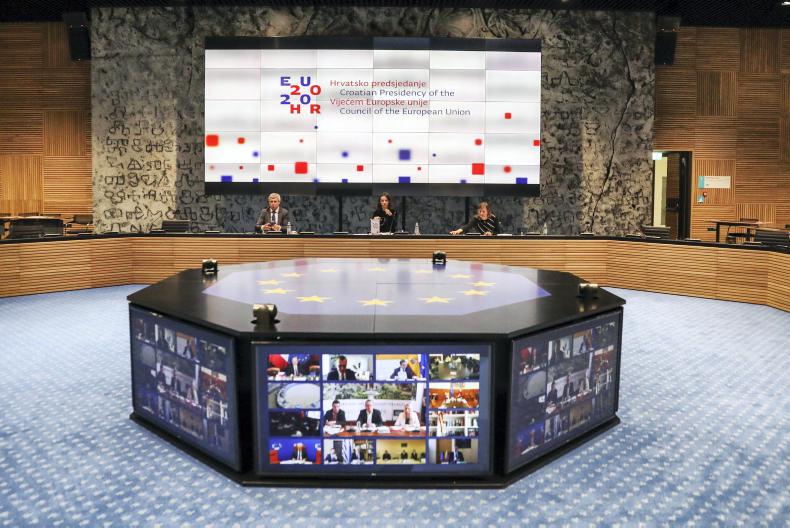 Subscriber only
This content is available to digital subscribers and loyalty code users only. Sign in to your account or subscribe for just €1 to get unlimited access for 30 days.
SIGN IN   SUBSCRIBE FOR €1   USE THE CODE
Dairy > News
26 March 2020
Barry Cassidy on 26 Mar 2020
Dairy industry frustrated at lack of EU action on market supports
The dairy industry wants measures such as private storage aid, export credit insurance and intervention put on the table at an early stage.

Croatian minister for agriculture Marija Vuckovic (centre) hosted a video conference with agricultural ministers from across Europe to discuss the need for supports. \ European Union

Dairy Industry Ireland (DII) has vented its frustration at the lack of movement from the European Commission on “vital market stabilising tools such as private storage aid”.

Agricultural ministers and the EU met by video link on Wednesday to discuss what measures would be necessary to support the agri-food industry through the COVID-19 crisis.

It had been expected in some quarters that a range of new measures would be announced after the meeting. However, in a statement following the meeting the Croatian minister for agriculture Marija Vuckovic said a few days would be needed to summarise the outcome of the meeting.

“Together with the European Commission, we will evaluate and decide on further steps to be taken,” she said.

DII director Conor Mulvhill said all supports and flexibility needed to be given to the dairy industry as the peak period approaches. He said failure to do so would have serious consequences.

Mulvhill said Ireland, which exports 90% of its product and has a small domestic market, was more exposed to the collapse of the food service sector that has occurred worldwide due to coronavirus.

“Dairy Industry Ireland acknowledged the role of Minister Michael Creed at the meeting who led requests for EU tools to be enabled.

“This is Commissioner Janusz Wojciechowski's first real test and we are urging him to make an announcement straight away to bring calm to the markets,” Mulvhill said.

Speaking after the meeting, Wojciechowski said it had allowed an overview of a fast-changing situation.

“I listened carefully and took good note of all the suggestions and requests that the Commission will now analyse and reply to. I will continue to follow the situation in close contact with member states. We are ready to take further action when necessary,” the Polish politician said.

Mulvhill said measures such as private storage aid, export credit insurance and intervention had to be put on the table at an early stage.

“While we completely support the initial focus of Government and the EU is to protect public health and keep food on the shelves, we also need to ensure that we have an industry and farmers can survive this and thrive when we come out of this period.

“This is Ireland’s biggest native industry supporting thousands of families and jobs across the island - it needs and deserves long-term protection,” he concluded.