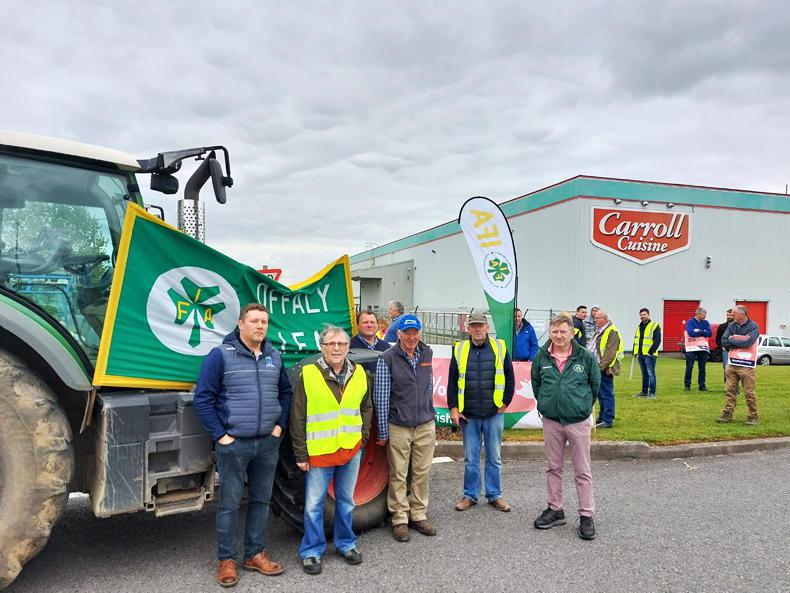 The Irish Farmers' Association (IFA) pig committee is leading a pig farmer protest at Carroll’s Meats, Tullamore, this Thursday over concerns of the alleged undercutting of pig prices by the processor to secure supermarket contracts.

Farmers have also said they are seeking assurances from Carroll’s that all pigmeat used by the processor and affiliated companies to supply contracts will be 100% Bord Bia quality assured Irish pigmeat.

IFA’s Ulster-north Leinster chair Frank Brady told the Irish Farmers Journal that the prices farmers are receiving for their pigs could be undercut by what appears to be processors low-balling supermarket pigmeat contracts and that pig prices must rise for farmers to remain viable.

“What we are doing here is trying to get a margin back into what we produce and this crowd [Carroll's of Tullamore] have taken some of the biggest contracts off other processors in southern Ireland," Brady said.

“If it is not sorted out soon, there won’t be an industry. There will be an awful lot of the sows gone in the next couple of weeks,” he said.

According to Brady, an urgent price increase is needed from factories to compensate farmers for recent rises in the cost of feed.

A 50c/kg price increase would only take farmers to a point where they would be breaking even, not even make a positive margin, he explained.

“There was need, urgent need, for something to be given last week and they decided in their wisdom that they weren’t able to give it.

“We’re not going anywhere. We are here to stay and that’s it,” Brady concluded.

Approximately 50 farmers and stakeholders are currently attending the demonstration, with two tractors and trailers parked at the factory’s front entrance.

The Irish Farmers Journal understands that IFA president Tim Cullinan is not yet in attendance, as he was part of the IFA delegation that met with management of Lidl Ireland earlier on Thursday.

Non-pig farmer protesters are set to remain at the gates of Carroll’s when the IFA holds a general meeting of pig farmers at 6pm.